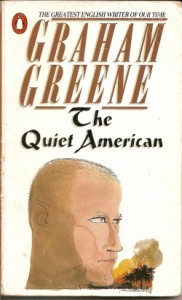 Greene was already a prolific and popular novelist when he spent the winters of 1951-54 in French Indochina as a war correspondent for The Times where he wrote and set this novel. At its core is a friendship between Fowler, a cynical British journalist, and Pyle, the titular American, though they could hardly be more different. Pyle is an earnest type, never happier than when expounding the geo-political theories of his old Harvard lecturer and using Fowler as devil’s advocate. At first mildly flattered and protective, Fowler becomes increasing irritated by the “young and ignorant and silly and … involved” Pyle, who insists, “there’s something you must believe in.” Fowler, however, believes in little beyond his need for Phuong, his lovely Vietnamese mistress. Then shortly after they meet, Pyle too falls in love with Phuong.

The story’s tightly constructed plot takes us full circle, beginning and ending with the same scene. Along the way it interweaves love, war, jeopardy, jealousy and chance, leaving us with a much clearer picture of 50’s Saigon and the alien influences competing for control of Vietnam’s future. Short as the book is, it is robust with detail. And Greene tantalizes with hints of stories behind minor characters: Vigot, the French police chief, Dominguez, Fowler’s Indian assistant, Granger, the US Economic Attaché. As is true of all Greene’s best work, he illuminates the minutiae of motivation but allows the reader to judge who is the most honest and who waywardly self-deluded.

In her 2004 introduction, Zadie Smith makes a good case for seeing the central characters as ciphers for their countries and our group agreed that this works very well. Some wanted to see their personalities plumped out a bit more, especially Phuong, whom Greene sketched lightly, accepting perhaps the limitations of his imagination, or, not wishing to be presumptuous, allowing ‘Vietnam’ to keep her own council.

Taking longer to write than most of his other novels, Greene appears to have been a man on a mission to get the story right. Early in his time there, on a long car journey, a US aid worker told Greene about the importance of a Vietnamese ‘Third Force’ which would shake up the weary colonials in the South and defeat the communists in the North, thus enabling democracy and free markets to get their foothold in the region. When bombs went off in Saigon Square in 1952, Greene had strong suspicions about where to look for blame. Published in 1955, American critics first dismissed the book as anti-war and anti-American. Many believed Fowler (to Pyle: “I’ve no particular desire to see you win.”) to be a thinly veiled Greene. In fact, The Guardian newspaper claims that, following the publication of this book, the CIA kept an eye on Greene until his death in 1991. Though undoubtedly anti-American, it is no longer dismissed. Events have proven The Quiet American startlingly prophetic, foreshadowing US involvement in Vietnam and, many believe, reflecting American policy in similar events. How naïve and aggressive is US foreign policy? The Quiet American is an elegant primer for introducing that question and perfect for scratching any anti-American itch.