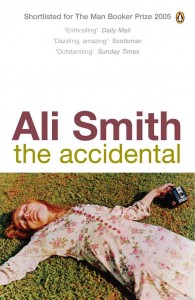 Unusually, The Accidental by Ali Smith was almost universally disliked.  Over the last year many of us were beginning to think that, because we knew we were reading for the Circle, we were being more open-minded and less critical of the books, resulting in high points.  It might be the case that we are more open-minded, but this time we found that it does not necessarily mean we’ll always be enthusiastic.

Sue introduced the book, going into Smith’s background, especially her preference for poetry and short stories, and admitted that perhaps the novel form was not where Smith’s talents shone brightest.  Lack of empathy with the main characters, the Smart family, was probably the worst problem.  The Smarts are an average middle-class family composed of professor stepfather, writer mum, depressed 16 year old boy and obsessive pubescent girl.  Smith herself didn’t appear to like them and they, consequently, were of little interest to us.  When the mysterious Amber walks into their lives and begins to shake each of them out of their meticulously maintained, highly polished emotional shells, we find it hard to care whether she is successful or not.  Amber’s methods could be extreme, so that her motives were very much in question which took up a lot of our discussion.

Smith’s imagery was often evocative and imaginative, but many of us found her riffs on popular culture overwrought and tiresome.  For most of us the book was a disappointment, but as always, the conversation was lively and many had upped their points by the end of the evening.