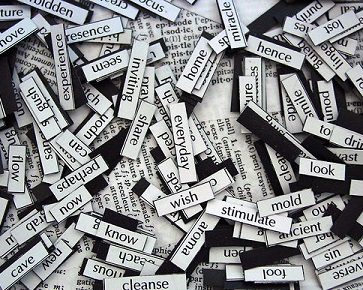 We decided to postpone our normal Play-reading in January and instead it was suggested that everyone bring along a favourite poem, or two! Easier said than done for some of our group – how does one choose a ‘favourite’ from such a wide-ranging genre? Hence Anne’s dining-room table was littered with a breathtaking selection from individual collections to large anthologies.

How does one define Poetry? The very nature of Poetry as an authentic and individual mode of expression makes it nearly impossible to define. It is an ancient form that has undergone numerous reinventions over time. Traditionally Poetry employed meter and/or rhyme but in modern times this is by no means considered necessary. It has been described as an imaginative awareness of experience expressed through meaning, sound and rhythmic language choices so as to evoke an emotional response.

A.E. Housman put it even more succinctly in a 1933 lecture entitled The Name and Nature of Poetry – ‘To transfuse emotion – not to transmit thought but to set up in the reader’s sense a vibration corresponding to what was felt by the writer – is the peculiar function of Poetry.’

This definition resonated with most of us and we went on, as Housman did, to discuss the difference between Poetry and Verse. Our readings when they began encompassed both and included Donne, Yeats, Owen, Kipling, Frost and Heaney. Joan recited a John Pudsey poem from heart that she had learned as a young girl and Tsering introduced us all to the Vietnamese philosopher poet, Thich Nhat Hanh. The Poet Laureate, Carol Ann Duffy both amused us and gave us cause for contemplation and Christine entertained us enormously with the witty verse of Ogden Nash. Our pleasure and discussion was curtailed as usual by time – some of us could have carried on much longer but regrettably we had no time to read Elizabeth Barrett Browning, Edward Thomas, Philip Larkin or Sylvia Plath. I’m sure for many of the readers of this magazine I probably haven’t even mentioned your own favourite poet.

Incidentally in a 2013 poll of the most requested poems on Radio 4’s ‘Poetry Please’ programme, Robert Frost’s ‘Stopping by Woods on a Snowy Evening’ came out top, displacing Kipling’s ‘If’, which had been voted the nation’s favourite poem in 2005 and 2009. In the same poll, T.S. Eliot was voted the greatest poet.

Something there is that doesn’t love a wall,
That sends the frozen-ground-swell under it,
And spills the upper boulders in the sun;
And makes gaps even two can pass abreast.
The work of hunters is another thing:
I have come after them and made repair
Where they have left not one stone on a stone,
But they would have the rabbit out of hiding,
To please the yelping dogs. The gaps I mean,
No one has seen them made or heard them made,
But at spring mending-time we find them there.
I let my neighbour know beyond the hill;
And on a day we meet to walk the line
And set the wall between us once again.
We keep the wall between us as we go.
To each the boulders that have fallen to each.
And some are loaves and some so nearly balls
We have to use a spell to make them balance:
“Stay where you are until our backs are turned!”
We wear our fingers rough with handling them.
Oh, just another kind of out-door game,
One on a side. It comes to little more:
There where it is we do not need the wall:
He is all pine and I am apple orchard.
My apple trees will never get across
And eat the cones under his pines, I tell him.
He only says, “Good fences make good neighbours.”
Spring is the mischief in me, and I wonder
If I could put a notion in his head:
“Why do they make good neighbours? Isn’t it
Where there are cows? But here there are no cows.
Before I built a wall I’d ask to know
What I was walling in or walling out,
And to whom I was like to give offence.
Something there is that doesn’t love a wall,
That wants it down.” I could say “Elves” to him,
But it’s not elves exactly, and I’d rather
He said it for himself. I see him there
Bringing a stone grasped firmly by the top
In each hand, like an old-stone savage armed.
He moves in darkness as it seems to me,
Not of woods only and the shade of trees.
He will not go behind his father’s saying,
And he likes having thought of it so well
He says again, “Good fences make good neighbours.”