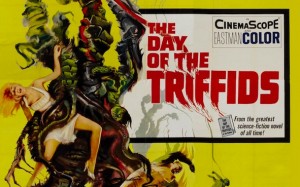 Have you ever described an odd plant in your garden as a triffid? John Wyndham’s novel brought the term into our vocabulary in 1951, and it entered the Oxford English Dictionary, rather late I think, in 1986.

What is it about triffids that catches the imagination? More than a few of our readers had been terrified by the book in their teens and a couple chose not to read it again. Wyndham combines a calm objective narrator with scenes of mayhem, tragedy and horror. The narrator, Bill Masen, wakes up in hospital, knowing it’s a Wednesday and wondering why it feels so much like Sunday. He soon finds that every living soul around him has gone blind overnight. In the next few chapters, as he travels around a strangely quiet London, he spots a few sighted ones like himself, but humanity’s fate soon becomes clear. Without sight, the society we take as much for granted as the air we breathe breaks down completely; transport and utilities come to a standstill; finding food is overwhelmingly problematic, and people become easy prey for a new opportunistic carnivore.

One of our group suggested that the book didn’t even need the triffids. The novel set up an interesting sociological experiment with a few lucky survivors and delved (not deeply enough for some) into various collective solutions. What kind of society would you like to be part of if you were starting from scratch? Which of society’s norms should remain and which would need to be dispensed with? During the discussion we were asked what we could personally offer a small group of individuals who not only needed to survive, but who also wanted to build society back up from complete annihilation. If you had to depend on just 30 people for your survival, who would you want them to be and what skills would they need to have? The Day of the Triffids provokes us to think about these things.

Everyone agreed that Triffids was an easy read. The plot was well constructed and each new problem Bill Masen faced increased the reader’s interest. It could be said that the characters were rather simple and old-fashioned, but like most science fiction, it’s not the characters that drive the story. After 60 years Triffids can still catch our imagination because it challenges us to confront a possible future. Wyndham’s most famous novel describes an outlandish scenario that is shockingly plausible because of a perfect storm of ambition, corporate greed, and short-sightedness on the part of individuals, organisations and governments. The combination of unregulated genetic experiments and ballistic warfare will always make us uneasy, and teenagers picking up the book for the first time today probably wouldn’t find these threats as alien as those growing up in the 1950s.

So, perhaps Wyndham didn’t actually need the triffids to tell his story.  But they are fun – as long as you’ve got your trusty flame-thrower with you.