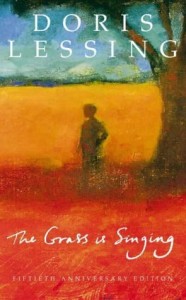 We had a warm enthusiastic discussion of a bleak, dispiriting book. What made The Grass is Singing so impressive? It’s the first novel of the Nobel Prize winner for literature, Doris Lessing. In an interview at the age of 80+ she said that, rereading it recently, she was surprised it was so mature for a 25 year old. But she’d always been a sharp-eared child, listening closely to the adult conversations that drifted over her discussing the quotidian problems and dramas of the white Africans in what was then Rhodesia.

The novel is set somewhere in southern Africa. A woman is murdered on her farm. The house boy has confessed and will hang. Only four people were near the house at the time: the woman, her husband, a new farm hand and the house boy. The next day the police sergeant and the adjoining farmer, who was first called to take charge, are not the least bit interested in what the farm hand has to say. They have already made up their minds. So what is the real story? The Grass is Singing was an immediate critical sensation when it was published in 1950. Lessing laid the stresses and strains of colonial Africa bare while she described with intense detail the difficult life of its society’s misfits, the poor white farmers Mary and Dick Turner.

One member of our group called it a brilliant vision of Hell. For many it was unputdownable, sparse, dry and desperate.