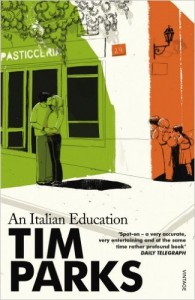 This month I had to say, ‘Sorry!’ for suggesting a book that left most of the group unimpressed and a few rather irritated. An Italian Education by Tim Parks was so underwhelming no one finished it. Not a single person. I am the only one who would have finished it (yes, really) had I had more time, and I will look for it again.

It definitely wasn’t a page turner. It was a series of loosely chronological vignettes that voiced the musings of an Englishman raising his children in Italy with an Italian wife, Italian friends and Italian in-laws, dealing with Italian bureaucracy and the Italian school system. He doesn’t usually offer any explanations, just examples; some funny, some frustrating and some just different. I found it refreshingly honest and unpretentious. Others simply called it dull. The two that liked it most were the two who have raised children in a foreign country.

We next meet on Wednesday, 2nd December. It’s all about books – a meeting to discuss our next reading choices with a few mince pies thrown in. Please bring two suggestions.

Wednesday, 13 January 2016 we will discuss Timbuktu by Paul Auster.

These meetings are on Wednesday so as not to clash with Pantomime rehearsals. We will return to Tuesday meetings after January. See you at the Panto!