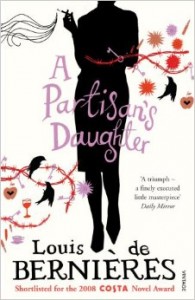 Chris is 40 and bored with his life. He has a daughter that he adores but is not particularly happy in his marriage (calling his wife ‘The Great White Loaf’). One evening he spots a prostitute, the first time he has ever knowingly seen one, standing on a street corner and decides to try to pick her up. Roza is not a prostitute though, and after laughing at Chris she tells him he can make amends by taking her home. Getting out of the car, she tells him that if he’s ever passing he should pop in for coffee.

Shortly after, Chris does just that. Roza lives in a squat, a house due to be demolished, but as they sit in the damp, squalid kitchen Roza starts to tell him stories. These stories are of her life, and her life has certainly been full. Born in Belgrade, Roza’s early life was influenced by her father, one of Tito’s partisans, and her stories are full of both her personal relationships but also comments on the wider political scene. She tells Chris about her time at university and then about her journey to, and illegal entry into, England.

Each story leaves Chris unsure whether he understands Roza more as the tales unfold, or whether they are even true. On her arrival in England, Roza has a comfortable life but finds it claustrophobic and leaves. After a fairly unpleasant experience (being kidnapped and assaulted) she is looking for someone kind and steady – Chris seems to be the perfect person. Roza harbours dreams that Chris will sweep her away, treat her properly and they will live happily ever after.

Until the night that Chris gets drunk, and heads round to her house intent on offering her money to sleep with him. Roza is devastated and this is their last meeting. Chris is left with a head full of stories, of questions, and a piece of paper with a note.

Louis de Bernières is clearly very knowledgeable about the Balkans and their history, at least in the 20th century, and this comes across in the level of detail he adds to Roza’s stories, along with her asides about the relations between the different nationalities. He has also captured 1970s London beautifully, with some lovely cultural references. However, no-one really took to the main characters, and the complicated relationship between them is an odd one.

This book divided opinion, with some finding it boring (the word pointless was mentioned!) and others finding some poignant passages in it, although it seems to be a book to like rather than love.

The book for next month is Winter in Madrid, by C. J. Samson. We will meet on Thursday 10th December.