Evita at the Hall For Cornwall 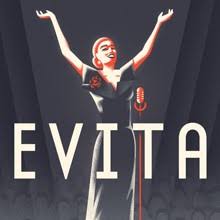 Following its smash hit run in London, Bill Kenwright’s production of Andrew Lloyd Webber and Tim Ricer’s Evita returns. Telling the story of Eva Peron, wife of former dictator Juan Peron, Evita follows Eva’s journey from humble beginnings through to extraordinary iconic status. Starring two of musical theatre’s most outstanding leading performers; Madlena Alberto (Les Miserables) returns to the role of Eva, a role she received critical acclaim for in the 2014 West End revival. Joining her in the role of Che, fresh from the recent West End production, is Gian Marco Schiaretti (Tarzan). Featuring some of the most iconic songs in musical theatre including, Don’t Cry For Me Argentina, On This Night of a Thousand Stars and Another Suitcase in Another Hall.