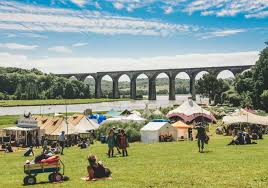 Port Eliot Festival is the original free-ranging festival of ideas, which draws an unmatchable collection of artists, musicians, writers, comedians, performers, thinkers, makers, protagonists, agitators and scribblers to one of the most beautiful corners of the country. This year’s Port Eliot Festival event will run from Thursday 26 to Sunday 29 July 2018 on the rolling park and woodland of the ancient estate at St Germans, on south east Cornwall’s Rame Peninsula.

Stages, tents, saloons and wooded glades are curated by the likes of The Idler Academy, Caught by the River and Lark’s Haven. The poetry stage, curated by Luke Wright and Rosy Carrick, cements Port Eliot’s place among the most significant homes for poetry of all UK festivals; the Ace of Clubs explodes with blues, soul, rock & roll, and, on occasion, opera; and the Park hosts the festival’s comedy and biggest bands.