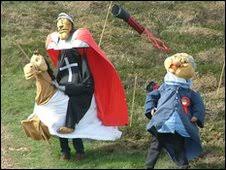 What’s it all about?

A celebration of Cornish music and art featuring life size puppets, a drum band and a 28ft giant effigy re-enacting the famous Cornish legend of the giant called Bolster. A great day out for all the family.

Long ago Cornwall was apparently full of marauding giants and one of them, Bolster, terrorized the good folk on the north coast regularly eating their children. To celebrate Bolster’s eventual demise, the villagers of St Agnes hold a pageant every year starting with a lantern procession, bonfire and barbeque.  The following day the Knight Sir Constantine and the bolster drummers parade the streets of the village in search of Bolster (a giant effigy) ending in a dramatic confrontation on the cliffs above the stunning Chapel Porth Beach.

This spring festival incorporates one of the county’s oldest legends with plenty to entertain old and young alike. Follow the lantern procession up to the beacon and gather around the bonfire where clay houses are fired and then used the following day to symbolise the village of St Agnes. The next day the pageant is about 45 minutes long and features life sized puppet characters such as the Mayor, Sir Constantine and Mrs Bolster. The Bolster drum band, musicians and dancers perform in the National trust car park at Chapel Porth beach afterwards and refreshments are available from Robin’s cafe.  Kids especially will love the huge puppets and effigies as well as the traditional pageantry. Evening entertainment includes live music in the village.

St Agnes Beacon is a local landmark owned by the National Trust and rises 629 feet above the surrounding countryside.  From the top of the beacon you’ll get fantastic views of the coastline from St Ives in the south to Padstow in the North. On a clear day, it is said 32 church towers can be seen from the top.