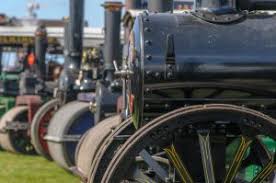 This long established rally was known previously as the West of England Steam Rally. Expect almost one hundred full size and miniature steam engines from all over the country. There are stunning showmen’s engines with their gleaming twisted brass, road rollers, ploughing engines, heavy haulage road locomotives and agricultural traction engines.

What happens?
For three days stunning showmen’s engines with their gleaming twisted brass, road rollers, ploughing engines, heavy haulage road locomotives and agricultural traction engines descend on the showground. Lots of steam engine crews having fun driving around the site and showing what the engines were designed to do.

How can you take part?
There is something for all the family with trade stands, a model and craft marquee, vintage cars, tractors, commercial vehicles, steam cars, military vehicles, motorcycles, heavy horses and stationary engines. There is a working and rural section which shows how farm work used to be done in days gone by with a number of demonstrations including wood sawing and threshing,  mainly driven by steam. In the main ring you can watch working horse demonstrations, hawking displays and a dog agility show and you can even have a go in the sheaf pitching contest. Brass bands, choirs, Morris men and cloggers provide the music and there is also an old time fun fair along with entertainers around the site to keep the children happy.

Did you know?
The first rally, attended by just six steam engines, took place in 1955 when the nearest full scale rally at that time was over 200 miles away at Andover. Stithians Showground is a purpose built site that also hosts the local agricultural show, the VW Owners Club rally and the Young Farmers County fair.