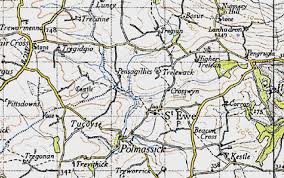 This is  a traditional rural event which deliberately kept at a reasonable size to maintain its charm and character. It is a very popular annual occasion for locals with many of the parish being involved in its running but it also attracts folks from around Cornwall and on holiday. Indeed, some visitors book their holiday to coincide with the fair each year. The last fair attracted well over 1000 adults plus youngsters.

They have side shows such as a coconut shie and ferret racing and traditional fairground rides. Mr Punch is one of the visitors to the popular children’s marquee and the horticultural tent puts on a fine competitive show which everyone is invited to enter. The food and crafts tent together with outside stalls sell a great variety of local fayre.

You won’t go hungry as they serve home made Cornish cream teas and fresh coffee in the village hall and have a large food marquee serving home cooked goodies from early morning bacon to lunchtime meals. There is a licensed bar serving amongst other drinks Skinners famous real ales, and of course ice cream.

You should see collections of fowl, farm livestock and birds of prey. They gather an impressive group of vintage tractors which can usually be persuaded to start for an impressive arena display. Other events in the arena this year should include; a birds of prey display, heavy horses, working sheep dogs, Bugle Silver Band and the famous Tug ‘o’ War for which they invite guest teams and there is a children’s ‘pull’.

It’s a country show, dogs are very welcome and they’ll encourage you to enter them in one of the categories in the Fun Dog Show.

They want everyone to enjoy a good day out at a reasonable cost, especially families, so under 16’s get in free and adults for just £5. All profits go to charity and since 2005 they have raised over £44,000. This year they will be supporting local charities and good causes.

For those of you who might like to be more involved, stalls can be booked via email or Facebook contact, other contributors should make contact via email or phone and they always welcome help before during and after the fair as running the event is all voluntary.

They look forward to seeing you in August!