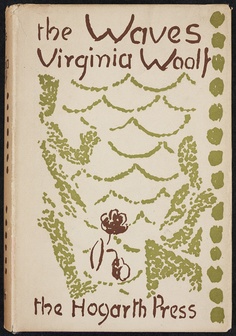 The Waves by Virginia Woolf strongly divided opinion; there were a record number of passes, but if you don’t count the passes, average points were high. And as I was updating the points I noticed that the number of passes has gone up for the last few meetings. Even though we want to read the book, sometimes it’s just not possible. As Robbie Burns says, ‘the best laid plans…’ or to paraphrase John Lennon, ‘Life happens.’ In a way it’s very encouraging to see passes, because it means that even if we haven’t finished it, or even if we’ve barely started, the discussion is still fun.

None of us had read a book quite like The Waves before. How do you tell a story from inside the head of six different characters, entirely through impressions and emotions, without any direct reference to time or place, and little rational thought? As we read we began to see a rhythm to the novel, but everyone found it perplexing to some degree.

Woolf tells the story of six friends from early childhood to old age, Bernard, Susan, Neville, Louis, Rhoda, and Jenny. We learn about each of them through their relationships with one another, their impressions of one another, their passions, amusements, insecurities, and calculations. As children their reactions are visceral, as teenagers they become more knowing, as adults they strive to fulfil their childhood dreams, some with a measure of success, some not. Woolf has written about people with her own background. They play in a big garden, are sent off to school, go to balls in London, dine out. But the natural world dominates, and each incident is described with incredible immediacy. The true plot of the book is the pattern of life: childhood, youth, maturity. What Woolf seems to be striving for is a novel about what it feels like to be human, and most of us thought she did a beautiful job.