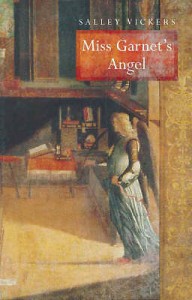 Miss Garnet’s is a retired teacher who decides on a whim to spend six months in Venice and soon the city is bringing out a warmer side of herself she didn’t really know existed. Shy and ascetic by nature, the rich combination architecture, art, food and people begins to open her eyes to new challenges and opportunities.

At our meeting opinion weighed in largely against the book and it achieved our lowest average score. Some loved the parallel Biblical fable and the quiet blossoming of Miss Garnet’s friendships. It is a slow, gentle book with many layers, but a few were unconvinced by her transformation and others were impatient with too many characters. Everyone agreed that it was a lovely portrait of Venice, easily recognised by those familiar with the places Miss Garnet visited.

It seems it was too much to ask most men to read about a spinster who travels to an exotic land, uncovering hidden depths in herself and art and life and friends, but the one brave gentleman who came to the meeting gallantly hoped the ladies would convince him the novel was better than he thought. He was a little disappointed, I think, when we couldn’t.  Two or three of us were reading it for a second time and thought it didn’t quite live up to our previous judgement. So perhaps it was an exciting book when it was first published, and the unusual weaving together of the ordinary and the fanciful proved so popular that it paved the way for better works.

We meet again on Tuesday, 27 May to discuss The Post Office Girl by Stefan Zweig.