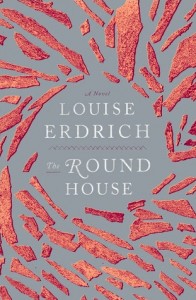 This month’s book represented a new venture for our group as it described Native American life on a reservation in North Dakota. The author, Louise Erdrich, has a wealth of experience from which to draw. Her German-American father and half French-American and half Ojibwe mother both taught at a school set up by the Bureau of Indian Affairs and her maternal grandfather served as tribal chairman for the Turtle Mountain band of Chippewa Indians, of which she is now an enrolled member. Widely acclaimed as one of the most significant writers of the second wave of the Native American Renaissance, she won the national Book Award for Fiction for this novel, The Round House, in November 2012.

The story focuses on thirteen year old Joe whose life on an Ojibwe reservation is shattered when his mother is brutally raped. Traumatised by the event, she takes to her bed and for a long time refuses to say anything about her horrific experiences. Joe’s father, a tribal judge, insists that the only response is to seek justice through the law. When this fails because reservation law does not allow the lawyers to pursue someone living outside Indian territory even if the crime was committed on reservation land, Joe decides to take the situation into his own hands. The advice he receives reflects the different cultures around him. His father advises the way of reservation law, the priest assures him that good will come out of evil and the traditional Native American way recommends revenge. Joe is accompanied in his search for resolution by a group of friends whose camaraderie is wonderfully portrayed by Erdrich.

As well as being a coming-of-age story this is about justice in a clash of cultures. One in three native American women are raped in their lifetime and 86% of the perpetrators are non Native American men, most of whom get away with it. Also important in this book is the location of the rape. It takes place near the ceremonial structure that gives the book its name. The Round House is the heart of the community, its sanctity is supported by mythological tradition, so the violation of an Indian woman by a white man on this spot is also symbolically a violation of Native American culture by an outsider.

This was one of the most popular books we have read. We loved the writing. Erdrich manages to get into the head of a teenage boy reassembling his world after a tragedy. We learnt a lot about reservation life and for those who like the detective genre it also had plenty to offer.

Our next meeting is on 30th April when we will be reading The Seagull by Chekhov. The following week on 7 May we will be discussing Claire Tomalin’s biography of Samuel Pepys, the Unequalled Self.