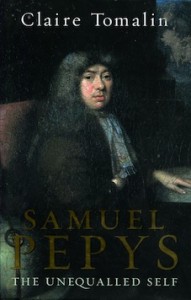 Who was Samuel Pepys? He wrote a diary. But what else? He is one of those people from history I knew of but knew next to nothing about. This biography by Claire Tomalin went a long way towards putting this right.

Pepys is a fascinating man. The son of a tailor, he rose to become Chief Secretary of the Admiralty. But the fascination is not so much that he was an extraordinary man, but that he was an ordinary man, living through a turbulent period of history, who just happened to keep a diary.

Having said that, to say he was ordinary is perhaps to do him a disservice. He was clearly a very clever man, who was also adept at making his way through the political and social chaos of the time. The combination of brains and social adroitness meant that he managed to manoeuvre his way through the Cromwell years, and navigate his way safely through the accession to the throne of King Charles II. He did spend time in the Tower but fared better than many of his contemporaries.

We are lucky that while he was keeping his diary, some major events took place. And so we see events like the Fire of London and the plague through the eyes of someone who lived it.

What we know of the man beyond the diary is actually quite limited, and Tomalin has done a wonderful job of trying to pull together the smattering of sources that describe his life before and after the decade covered by his diaries. It is, though, the diary years which really come alive and give you a sense both of the man himself but also the period in which he lived.

Most members of the group enjoyed the book, finding it informative and interesting, although it cannot be described as ‘gripping’. Much of the discussion was about whether we liked Pepys, the man, or not – a credit to Tomalin’s telling that we all felt we knew him well enough to do this! Several members are keen to read more by the same author, and more about this period of history.

The book for next month is The Way We Live Now by Anthony Trollope. We will meet on Thursday 27th August.